Why horses? Why do I always write about them? Is it that they have four feet, a shaggy hide, a silky mane and a soft nose?

A Silent Shadow of Trust, of being one with each other. That is the begining of unity and communication.

No, although that is a bonus, there is something deeper.

I never wanted horses, never dreamed of owning one, they where already there.  Like so many other people I have spent my entire life around horses. While my mom was pregnant she would ride, before I could walk she would ride with me in front of the saddle, by the time I was two I had my first pony, Mighty Mouse, and bought my first pony mule Fred by age eight. And inbetween those two, I had… are you ready? Rat Fink, Mini Mouse, Motor Mouse, Momma, Breezy, that was seven horses by the time I was eight. Some not broke, some really broke and some, well like Fred,  not even broke to lead… which I had to lead him home from the sale barn about a mile and a half to home. Which took me three hours. Mom said I had the patience of Job. I hadn’t met Job yet, but if he could help me teach a mule to lead, I would of been forever greatful.

Then there were the temporary horse, the ones that had gotten a bad rap. Ones that would rear over backwards, pull back, run away with you. The ones that need a little more groceries and a little more TLC. Through my teenage years I spent it in the corrals. I spent summers riding with the neighbors and racing down dirt roads. I went to play days and little rodeos. But competition is not what I was after, winning a ribbon was fun but not where I was driven.

When my dad would bring a new horse home, I would sit and watch them, they would explore their new surroundings and go through the emotions of being an out cast and learning how to adjust. In that internal fight for acceptance, the new horse would usually come over and check me out. I would sit out there for hours, not because I was training, but because I had no other place to go. Before long in a couple of days, I would have them saddled, ridden, harnessed, out pulling a sled. Depending on the horse of course. 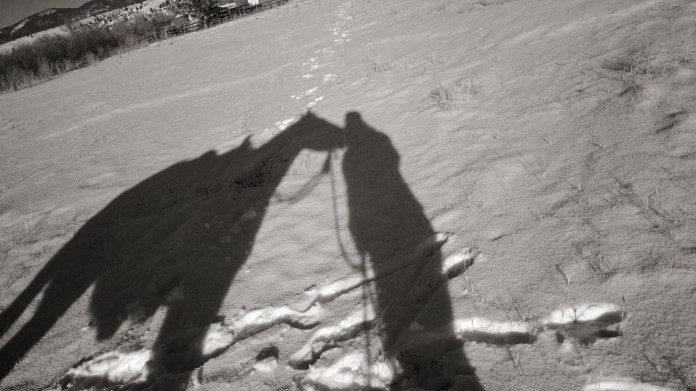 For some reason that is what worked for me. I was intrigued by their curiosity, their willingness, their mystery.   My dad would come home and see some of the things I done and kind of chide me to be careful, and instill that they can kill me.

And the story goes from there, I never out grew that intregue.

The other day I went out to feed, Deacon waited by the fence. I began my daily routine. I always feed over a certain fence and usually Deacon and Hitch wait eagerly for their highly antisipated hay. But today Deacon stood in the corral corner watching me, while I had thrown hay over Hitch had began his breakfast, Deacon refused to go eat with his pasture buddy. Which usually is not a good sign.

After I finished chores Deacon still stood in the corral watching me. As I made eye contact he nickered softly. I walked over to him, scratched his head, crawled through the fence to investigate why he was not eating. As I walked, he followed. I don’t know why but I headed over to the hay and he walked beside me the whole way never leaving my side. When we got to a flake of hay, he began to eat like that is what he wanted. He wanted me to be with them, maybe?  I stood there for a few moments, checked on Hitch, scratched his shoulder then I left to go to work.

That mystery will forever intrigue me as to why that was important to a horse. What is it about them that they bond to us like family to some and others they ignore in the same family. With one swift kick they could take a person down. One swift bite, or roll them on the ground, but they for the most part don’t. They want that bond or connection if given the opportunity to play with that mystery of not only awareness but self discovery. So I guess it is the mystery of the horse and what they have to say. And if I listen, do I get it right?

One thought on “Why Horses”